Happy Wednesday BaddaBing BaddaBlog readers! This is Pop Culture Wednesday, the place where any and everything in the world of media is eagerly examined and critiqued. Today’s topic is a low budget television show that no one thought would get a second season, not even the writers. However, it easily and quickly proved itself to be a quirky gem and just wrapped up its second incredible season. Today’s post is going to be all about ABC’s original program, Galavant. 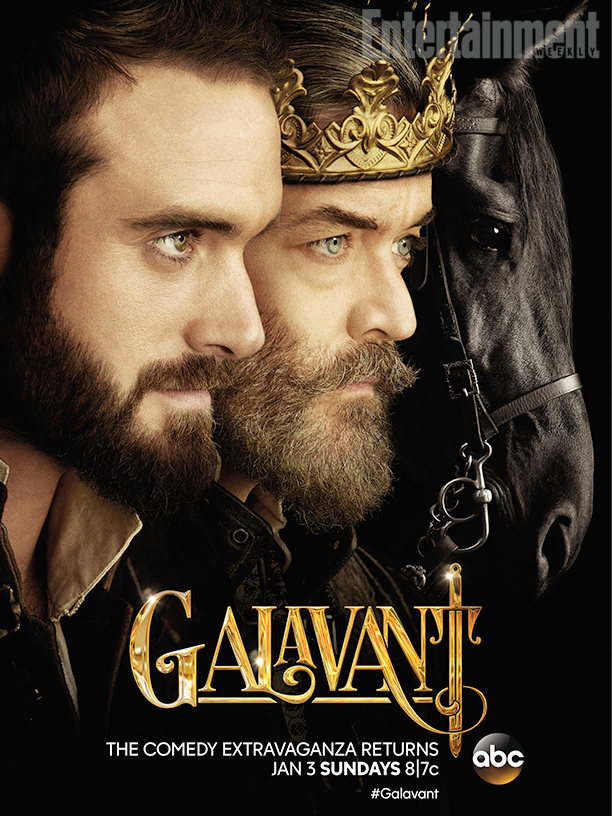 I am not going to spend much time talking about the plot of Galavant because, frankly, it doesn’t really matter. Nobody is watching Galavant for the plot. People watch and love Galavant because of how well it parodies and pokes fun at tropes in the increasingly popular fantasy genre. I would go so far as to say that Galavant’s plot only exists so far as to move the characters into a new fantastic situation that they can make fun of. This is in no way a weakness of the show, however, as Galavant should first and foremost be thought of as a comedy in a fantasy setting that makes fun of those very settings.

Oh! There is also singing. Like, a lot of singing. It’s probably clocking in at around two song and dance routines per episode. These are usually fun and sometimes travel into the territory of being both great and hilarious. My personal favorite number involves Weird Al Yankovic in the first season. I know that singing and dancing may seem a bit out of place in a very meta fantasy comedy, but this series is made by Disney after all. It also helps pad the run time a little bit.

One of the biggest compliments I can give the show is that it is perfectly cast. Every character in Galavant feels incredibly real and natural. It may just be because I’m such a big fan of meta humor and the fantasy genre, but I really suggest that whomever is reading this go watch the program. It’s on Hulu for free and totally worth the time sink.

That is a GIF of a dragon that was purchased by the One King to Unite Them All from a traveling merchant. The King bought the dragon by giving the merchant the most valuable jewel in the entire kingdom. A jewel that was supposed to be used to help his best friend, the titular Galavant, purchase an army so that he could rescue his one true love. That dragon’s name is Tad Cooper. We super believe in him.

If you got even a chuckle out of that last paragraph, you would love Galavant.

Alright, that just about does it for this installment of Pop Culture Wednesday. Now go watch Galavant! Actually, hold off on that for a second. First, you should like this post or leave a comment if you feel so inclined. You can also subscribe to this blog by entering your email in the upper right tab. Alternatively, you can stay up to date by liking the official BaddaBing BaddaBlog Facebook Page or by following me, @LucasDeRuyter, on Twitter. Alright, now go watch Galavant. Or just go and have a great day, or both!