Happy Wednesday BaddaBing BaddaBlog readers! This is Pop Culture Wednesday, the place where we dive into some awesome pop culture related news or trivia in an effort to make hump day more spectacular and get you through the rest of the week. Today’s topic comes from some good friends of mine who recently discovered this program and are falling as head over heels for it, as they are for each other. Their name is Blair Huggles and they love Futurama. 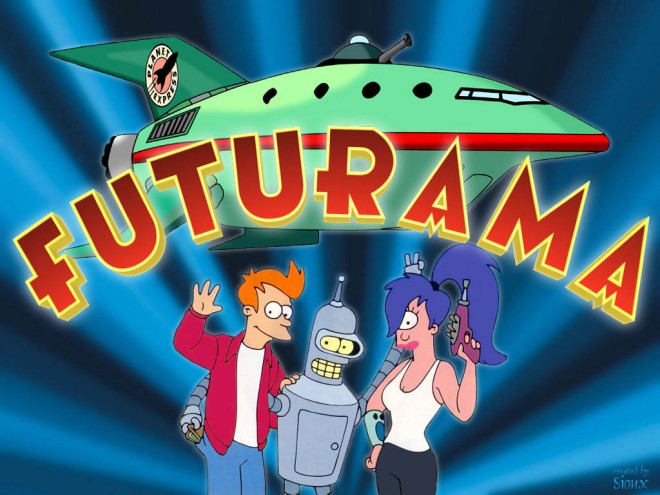 Futurama is a gem of a television show with a wonderful premise. In the year 2000, a lowly pizza delivery boy, Phillip J. Fry, is accidentally cryogenically frozen while on a delivery. Upon waking up a thousand years later, in the year 3000, and learning that everyone he ever knew or cared about is dead, he express jubilation and eagerly looks foreword to exploring the new and strange world before him. Through a series of events, he quickly meets the beautiful cyclopes woman and ace pilot, Leela, who throughout the series is Fry’s on again, off again romantic interest. He also meets the alcoholic one robot party machine/bending/Kleptomaniac unit, Bender. I say he’s an alcoholic mostly because he’s a lovable ass, but in actuality he needs to consume alcohol to power himself. The three become fast friends and quickly travel to Fry’s ancient nephew’s deliver company, Planet Express, and work for him. In the course of a thousand years Fry is once again a delivery boy, but this time eagerly kooks foreword to the adventures that go along with delivering packages to any point in the vastness of space.

Futurama is a good show. It kind of has to be considering that it was cancelled and brought back on three separate occasions. The biggest praise I can give the show, though, is that it is smart. Do you know how a lot of people think that The Big Bang Theory is smart solely because it focuses on smart people? Futurama actually is smart because it was made by intelligent people and for intelligent people. The writer staff of the show held three Ph.D.s, seven master’s degrees, and collectively possessed more than fifty years spent at Harvard University. The sheer knowledge and creativity of the show’s writers and creators bleeds into the show constantly. Over the course of Futurama’s run the show seamlessly blended high and low culture humor, created three separate languages, and invented a mathematical formula to determine how to get individuals who have switched bodies back into their original body, if no two people can switch directly with a person they had prior.

There are a lot of things I personally love about this show as well. In case you did not gather from the clips above Zoidberg is one of them. He is formally my spirit animal and just a perfect combination of goofy, pitiable, and lovable. I also very much like how the show embraces and pushes out their science fiction concepts. I believe that their originality and willingness to push the envelop is what has allowed other more high concept show like Rick and Morty and Man Seeking Woman to find the success that they currently have. Futurama my be less famous and less long lived than some of Matt Groening’s other works, but it is sill wonderful and totally worth your time if you want to watch something on Netflix.

Alright everybody, that just about does it for today’s installment of Pop Culture Wednesday. If you liked it please leave a like below and maybe even a comment if you feel so obliged. It’s much appreciated. If you want to stay up to date on this blog, you can subscribe to it in the upper right tab by using your email. Alternatively, you can stay up to date you liking the official BaddaBing BaddaBlog Facebook Page, or by following me, @LucasDeRuyter, on Twitter. I hope you all have a truly kickass rest of the week and I encourage you to come back to this blog on Saturday for the latest installment of Game Grind.