Happy Friday BaddaBing BaddaBlog readers! Do you want seem smart to your hammered friends while barbecuing of labor day weekend? While put down that thesaurus, because this is News for the Mighty, News of the Week; the recurring article dedicated to giving you the knowledge you need before heading into the weekend. Here we go!

Good, I say. Good to this entire situation. I think it is fantastic that someone who is using their religion as a shield for them to  spew hate and inhibitory is being punished. Personally I think the funniest part of this entire incident is that Kim Davis has been married four times and divorced three times. So her crusade to defend the sanctity of marriage is completely founded on BS and hypocrisy. This is a win for all the good and decent people in the world.

More on this story here.

A federal judge has overturned the NFL’s decision to suspend Tom Brady from playing in four Football Games. The judge stated that there was not enough evidence to suspend Brady. Brady’s suspension was originally given to him because he was accused of having deflated footballs so that they would be easier to catch and throw. The Patriots quarterback will be playing the first game of the team’s regular season.

I bet everybody who picked up Brady in the fifth round of their fantasy draft are feeling pretty good right now. I personally do not care much about this development, but I do think that this situation has been weird from the start. I’m pretty sure that Brady did deflate those balls. In fact, I’m more sure that Brady did what he stands accused of, than I am sure that OJ did what he was accused of. However, the NFL really does not have any ground rules to handle incidents of cheating. It really seemed like the commissionaire, Roger Goodell, just puled a number out of a hat and that’s how many games Tom Brady was suspended for. It sucks that someone who did something bad isn’t being punished, but sometimes that happens in life and you just have to deal with it.

Are you guys ready for all of the latest celebrity news and gossip??? Well get ready because here it comes. It was recently revealed that everyone’s favorite power couple, Kermit the Frog and Miss. Piggy, have broken up. I know, I know, I’m supper depressed too. But by the sound of it, this was a mutual decision and both of them are handling it well.

In fact, sources are saying that Kermit has already moved on.

Here Kermit is talking to what is thought to be his new girlfriend, Denise. I personally hope that Kermit and the Natalie Dormer look alike are very happy together. Seriously though, I know a couple vegans who would be cool with eating bacon now.

If you are concerned with how Miss. Piggy is doing, don’t be. She’s all good. Rumor has it that she may or may not be having a tryst with Hunger Games star Liam Hemsworth. The two were seen being very familiar with each other in the picture below. I cannot wait to see how these situations develop once The Muppets premiers on ABC on September 22nd. 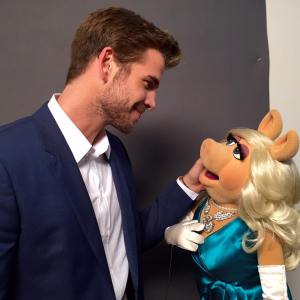 That about does it for this weeks installment of News for the Mighty, News of the Week. If you enjoyed it, go ahead and give it a like or leave a comment down below. If you wish receive BaddaBing BaddaBlog notifications, you can subscribe via email in the right side tab. You could also check out the Facebook Page or follow me on Twitter; my handle is @LucasDeRuyter.   Have a great Friday guys and keep an eye out tomorrow for the next installment of Game Grind.

News for the Mighty, News of the Week: Comeuppance