Happy Saturday BaddaBing BaddaBlog readers! This is Game Grind! The place where we either rage or geek out to anything having to do with video games or the video game industry. Today’s post is going to be a little…….different. There is not a ton going on in the video game industry right now, at least nothing regarding stuff I care about, so I’m a bit short on content. I could post something regarding everyone’s favorite legendary Pokemon, Mewtwo, as today is coincidentally his birthday, but that’s been done before and done way better than I could ever hope to. (Check out this video by the incredible YouTuber TheJwittz, for more info. on that.)

So to fill this lull, I decided to dive into the rich history of gaming. Today’s post is going to be a completely arbitrary list of some of “best’ moments or aspects of various video games as determined by me, Lucas DeRuyter. Here we go, bitched!

Screw you Undertale! (Just kidding. I love you but I cannot in good conscious say that your are the best game ever. Suck it Gaming FAQs.) The Legend of Zelda: Ocarina of Time is, in my humble opinion, the best video game ever made. I say this not because you are my favorite Zelda game, nor because I have an intense nostalgia filter, but because Ocarina of Time changed the face of gaming in a way that has never since been matched. This game raised the bar for video games in a way that has never really been matched in the nearly twenty years since its initial release.

The original Metal Gear Solid is probably my favorite video game. It would be my pick for the best game ever, but I think there is more of a community conscious on LoZ: OoT. Metal Gear Solid is my favorite game though because it is one of the greatest video games every made and because it shaped me as a human being. I watched my Dad play this game as a four year old and it BLEW MY FREAKIN’ MIND! This game introduced me to video games, this game introduced me to science fiction, this game is the game that I have compared all other video games for the past sixteen years. I know I probably should not have experienced this game as a four year old, buy I am incredibly grateful to Papa DeRuyter for letting me watch him play it.

The second generation of Pokemon is easily the greatest sequel in all of video games. Pokemon Gold and Silver not only improved upon the original games in literally every aspect, but it also allowed you to travel back to the area from the original games after you had essentially beaten the game. Also, at the very end of the games you get to battle the player character, Red, from the first generation of Pokemon. That’s right, at the end of the game you are beating the character that you spent dozens of hours playing as and turning into the biggest badass in all of Pokemon. It was god damn epic! 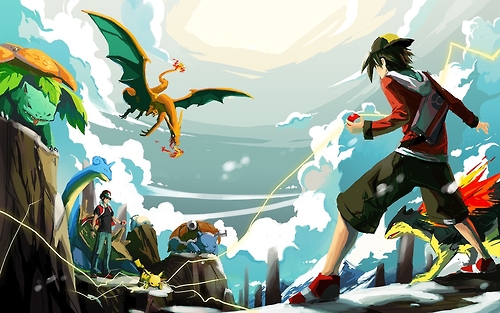 If you have followed this blog for essentially any amount of time, you should know that I absolutely adore Shovel Knight. This independent gem is one of the first crowdfunded games to really demonstrate the quality of games that can come out of that funding strategy. This game is incredible not only because of how well done it is, but also because of the sheer amount of heart the developers put into every aspect of this game. I also love how much this game made me feel. Sure, it’s not as much of an emotional gut punch as Undertale, but Shovel Knight gave me the feels first and because of that will always win out in my opinion. Plus DLC!!!

Sorry FF6 fanboys and fangirls, my favorite game in the series is Final Fantasy VII. I will admit that I have not played the sixth installment in the franchise, but I do not think that it would change my opinion. I love this game. I love the story, I love the characters, and I love the setting. I lost my shit when the remake was announced and I am still giddy as hell for it. FF15 might cause my opinion to sway, but it’s going to have to go well beyond the hype to do so.

Alright faithful readers, that wraps up the first installment of Game Grind: Bested by the Best. This was actually pretty fun to think about and write; I’ll have to do this again the next time a slow news week comes around. If you enjoyed this post, please give it a like. If you have any strong opinions on my choices, please leave a comment down below and I would be more than happy to respond. If you want to stay up to date with 4B, you can do so via your email in the upper right tab. Alternatively you can stay informed by liking the official BaddaBing BaddaBlog Facebook Page or by following me, @LucasDeRuyter, on Twitter. I hope you all have a great rest of the weekend and be sure to stop back here on Monday for a very special installation of Manga (And Also Anime) Monday.