Happy Saturday BaddaBing BaddaBlog readers! This is Game Grind, the place where any and everything video game related is discussed with vigor! Today’s topic is going to be a doozie; and by that I mean that this topic is fairly controversial. Today’s post is going to be all about localization, or the changes a game goes through when it adapted for a new audience in a different region than the one it was produced for originally. 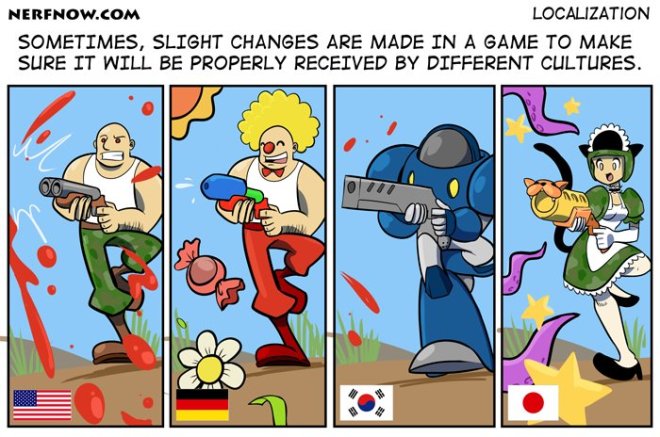 I should begin this article by prefacing that localization is one of the biggest reasons why video games have become a world wide phenomenon and is a massive contributor to its growth as an art form. Localization, in its most basic form, is changing aspects of a game when it is brought to a new culture, so that the new culture can more easily enjoy it. When localization occurs, the most apparent change in a game is it’s language. By changing the language in a game to the most common language of the culture it is being introduced to, it allows for thousands if not millions of people to easily experience and understand the narrative that is being presented to them. Localization allows stories and perspectives from all over the world to be shared and experienced with people who never could otherwise. Localization can bring people from all over the world together and that is pretty freakin’ awesome.

However, that being said, localization can suck sometimes and can be the generator of a lot of controversy. Coincidentally, the most viewed article on this blog happens to be controversy created due to the localization process. You can read the full article right here, but that post was essentially about how the game Dead or Alive Xtreem 3: Beach Vollyball, would not be receiving an English release and localization due to its very sexualized content. In this game’s case, the creators decided not to release it in English speaking areas, although it can be imported to western nations and the game by default does have English subtitles, however what usually happens in situations like this is that the potentially controversial material is changed so that it is less offensive to the culture that it is being introduced to.

A recent example of this can be found in the upcoming Fire Emblem: Fates games. In these games there exists a character that gets flustered when she is around attractive women. In order to help this character overcome her kind of, sort of gynophobia, the player character puts a magic powder into the woman’s drink without telling her that makes her see men as women and women as men. After other interactions with the female character, the magic powder wears off and the player character and this female character enter into a romantic relationship. Nintendo, the producer of the Fire Emblem games, announced that these scenes would be changed when it came to the west, primary due to fans seeing these interactions as being representative of gay conversion therapy and drugging women. Some people have seen this change as being a positive one that appropriately addressed culturally sensitive issues, while others have responded to this announcement as this game being censored due to the actions of “Social Justice Warriors”.

I am not going to go into too much depth regarding that localization decision, mostly because there is a lot to unpack there and because it merits a whooooooooooooooole other post in and of itself, but I just want to make it clear that changing certain elements of a game is not uncommon in the localization process. In fact, in the previous Fire Emblem game, Fire Emblem Awakening, a character had their personality completely changed between the Japanese version and the English one. In this case, though, I wholeheartedly believe that this change was for the best and that the character was actually improved upon when the game was brought to English speaking countries. I believe this mostly because in the English version they made the character, Henry, punnier. 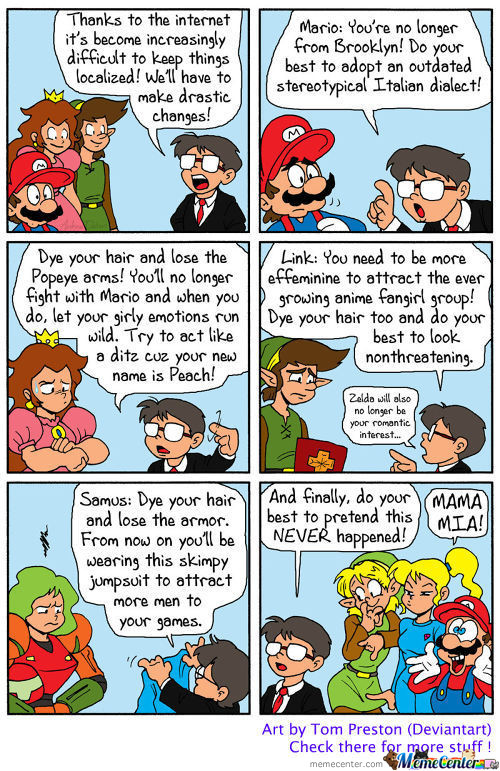 So that more or less is why localization is controversial; it changes a work of art so that it fits better into the cultural views of the newest group experiencing it. Can localization be considered censorship? I personally think not, but I could definitely see the case that is being made in the contrary. Sure minor character details regarding a game have changed in the process of localization, but I cannot think of one game to be released recently that has had a large part of its story or message changed due to being presented to a new culture. The main issue I have with localization is that it can take so damn long!

For example, it was recently announced, with much less fanfare than what I believe it merits, that the video game Bravely Second: End Layer would be coming to North America on April 15th. This is nearly a full year after the game was originally released in Japan and two months after it was released in Europe and Australia! It’s no secret that I loved the original game, which coincidentally had it’s own share of peculiar localization changes, and I am severely bummed about having to wait so long to play the sequel.

I know that the localization process can be extremely time consuming, expensive, and nuanced; but I do not care because I desperately need my JRPG fix and because I am extremely eager to see where the story goes from the original’s heartbreaking ending. So there you have it; my personal opinion is that I am far more frustrated with how long a localization process can take sometimes than I am with the process “censoring” (read, sarcastically quote, un-quote) the game. If localization ever does truly and deeply effect a games narrative and it’s messages, I will be the first one to riot; but, until then, I really do not care.

Alrighty, that is more or less all I have to say on this sensitive-ish video game topic. If you liked this post, please leave a like down below and if you have a question or strong opinion about localization, go ahead and leave a comment as well. If you want to stay up to date on the going on’s of this blog, you can subscribe via email in the upper right tab. Alternatively, you can keep up to date by liking the official BaddaBing BaddaBlog Facebook Page or by following me, @LucasDeRuyter on Twitter. I hope you all have a great rest of the weekend and be sure to stop by on Monday for the next installment of Manga (And Also Anime) Monday.