Happy Monday BaddaBing BaddaBlog readers! This is Manga (And Also Anime) Monday, there place where our appreciation for anime and manga is strong enough to pierce the heavens! Total disclosure, that’s a quote from an anime I have yet to actually watch, so I may have just broken a rule by saying that. But, yeah know, that’s how I roll. Today’s post is going to be dedicated to explaining how exactly anime became a medium that is considered view able for all ages, while western animation and cartoons are generally considered to be exclusively for younger audiences.

The explanation for this phenomenon can actually be boiled down to two simple features: money and circumstance. Anime did not become an all ages medium due to anything really culturally related or due to any specific campaigns; it became such a diverse medium because when anime first started to be produced, it was profitable for many anime to be made for different demographics of people. Allow me to explain.

Anime first began to take shape as we recognize it today in the 1930s. This anime was heavily influenced by the incredibly famous animation of the Walt Disney studio. With the exception of a few cultural tells, this early anime is almost indistinguishable from the western Disney animation. 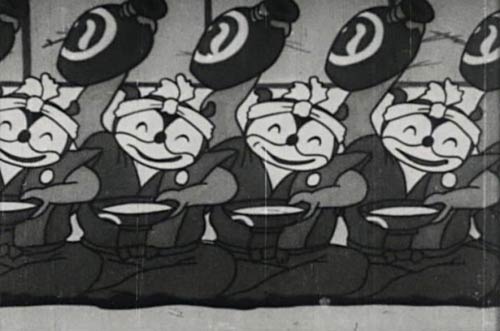 However, early anime production companies quickly realized that they would not be able to make anime that was as high in quality as Disney’s and still be cost effective. This resulted in a shift in focus in Japanese anime, where the narrative of a work was focused on more and placed in a higher regard than the work’s animation. Then the Great Depression happened. While the Great Depression is generally taught as being an event that really only heavily impacted the United States, the implications of the massive economic decline were worldwide. Japan suffered from this depression as well and, seeing as animation was a rapidly growing industry at the time, many young men looking for work ventured into the anime industry as a means to support their family.

Then World War II happened. I’m not going to sugar coat it, anime got a little bit propaganda-y during this time frame. Actually, now that I think about it, everything kinda did, which I suppose makes sense. Anyway, after Japan loss the war (Go Team USA!) anime and other creative works were pretty heavily censored and it was very frowned upon to release any creative works that criticized or depicted government officials or any real world figures or events.

This is when anime started to become so thematically diverse. The combination of an incredible number of working age individuals with animation skills and the restrictions of not being able make anything too closely related to the real world pushed anime into exploring more varied and high concept story lines and themes. It was during this time period that anime was first being created for such a wide assortment of age groups. Anime with factious story lines were created for multiple demographics simply because there were to many creators to just focus on younger audiences and because creative restrictions at the time gave anime produces to explore more adult tones and themes.

There you have it. Anime exists as it does today because of a wide combination of events that forced the medium to repeatedly reshape its identity. This makes anime both a kind of medium and a genre as it is so thematically varied and has such a massive audience. It is through all of these events that today we have Shonen anime, Seinen anime, Shojo anime, Josei anime, Kodomomuke anime, and pornographic anime. Yeah, that last one is actually a thing and merits a whole other post (although don’t hold your breath on it). The point is, anyone today can watch and enjoy an anime mostly because there many different kinds of anime intended for many different kinds of people and it it were not for several different events lining up the way they did, anime today would be very different from what we all know and love.

I hope you all liked today’s post about anime’s history. If you enjoyed it, please leave a like and a comment down below. If you would like to stay up to date with this blog, you can subscribe to it in the upper right tab by using your email. You can also stay informed by liking the official BaddaBing BaddaBlog Facebook Page or by following me, @LucasDeRuyter, on Twitter. I hope all of you have an amazing week and that you stop back here on Wednesday for the next installment of Pop Culture Wednesday.

Manga (And Also Anime) Monday: Anime for All Ages