Happy Monday BaddaBing Baddablog readers! This is Manga (And Also Anime) Monday, the place where anything relating to the uber popular Japanese media is discussed, analyzed, and critiqued with vigor and enthusiasm. Since today’s subject is a fairly lofty one, let’s dive right in.

I have a friend, yes it’s Andy again (damn you Andy!), who refuses  on principle to watch any kind of anime. No matter what I recommend or how much the plot of the series would resonate with him, he blatantly refuses to watch any of it. To this date the only anime or anime related media I have gotten him to watch is Attack on Titan and the Team Four Star parody of Dragon Ball Z. Every time I do bring an anime to his attention, and he refuses to experience something that would bring entertainment and momentary happiness to his otherwise listless existence, he always talks shit about anime collectively. Most of the time he’s talking out of his ass, but occasionally he does make a criticism that is fair and could be considered a problem or weak point of the medium. 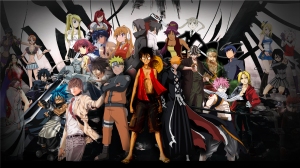 In today’s post I am going to address what I believe to be some of the biggest issues and problem in the anime industry. I suppose this could be thought of as an open letter to both the creators of anime and viewers of the media, but I’m personally viewing this post as an expression of my individual feelings in an attempt to help me better understand and formulate my opinions. If I express an opinion that is counter to your’s, good. Leave a comment down below and we can begin a civil discussion with the intent of improving both of our viewpoints. Or have a flame war, whichever. With all that in mind, here’s why anime sucks and how it can not!

A lot of anime really do not have anything even closely resembling an ending. Far too often have I seen an anime end without answering all of its main story points, showing some definitive growth in a character, or even finishing its current story arc! It’s more than obvious why this is happening, by leaving an ambiguous ending the creators of the anime increase the likelihood of it getting a second season, which gives them the potential to make a lot more money. This unfortunate trend has become even more prevalent recently as the production and distribution of anime has become much more standardized; with a new series today usually having either twelve or twenty four episodes. When an animation staff attempts to adopt a, usually ongoing, work to an anime, which as previously discussed is usually the case, it is easy to chop the adaptation off on a cliff hanger or after an arbitrary story arc in the hopes of continuing the series in a second season. This practice needs to stop mostly because it is incredibly annoying and frustrating to fans and because it has the potential to ruin an otherwise great series.

Stop Being Dicks to Animators!

It’s one of the worst kept secrets in anime that people who actually create the product that potentially millions of people love and appreciate, are treated incredibly poorly. The animators and artists are expected to make extremely high quality work as cheaply as quickly as possible. This leads to a lot of production companies cycling out older employees for younger ones who are willing to work longer hours and for less pay. When all is said and done, a lot of animators in the anime industry wind up putting in a bunch of overtime and walk away with what then becomes a little more than a minimum wage salary.  This needs to stop and, while the ramifications of this may be larger than expected, production companies simply need to pay their employees more.

This criticism is admittedly somewhat nitpicky. One of Andy’s frequent criticisms of anime is that it often has too much internal monolog from the characters. I actually somewhat agree with him in this complaint. While monologs from a characters are a practical way to establish what they character is feeling or deliver exposition, it is often jarring to see a character completely still and holding the same expression for minutes at a time. This practice is most likely a relic of anime being adapted from manga, where it characters are drawn definitively in a black and white panel. Anime has a lot more tools to work with in motion, color, and sound. While the adaption could be considered less faithful, I personally think it would be beneficial to anime as a whole if monologs were used less frequently to deliver information and perspective to the viewer.

Enough With The Filler!!!

This is my last and also biggest criticism with the anime industry. There is far too much filler in series that have managed to break the twelve or twenty four episode restriction. Filler is any additional content or storylines that did not exist in the original manga from which a series was adapted. Filler can take the shape of a single episode that focuses on a specific character or group of characters, or it can take the form of an entire multi episode story arc. Filler is generally used to extend the gap between where the manga is in the story and where an anime is in the story, as an anime can tell a story more quickly and it often catches up to the source material. Filler can also be used, and has lately been mostly used, as a kind of cash grab. By extending a series beyond what it reasonably should be, it is much easier to continue to sell merchandise for the series and even sell the extra episodes in a DVD or digital download format. The anime that is most guilty of doing this in recent memory is Naruto, which often has more filler episodes in a year than episodes that actually move the story along. This practice in excess is incredibly insulting to both the fans of a program and its source material, this needs to stop immediately.

Alright, I apologize if that got a bit ranty, but I really needed to get that off of my chest. Thank you so much for reading this and please feel free to leave a like or a comment down below. I hope you all have a great week and be sure to come back here on Wednesday for the next installment of Pop Culture Wednesday.

Manga (And Also Anime) Monday: How to be Better