Happy Humpday BaddaBing BaddaBlog readers! It’s Wednesday and that means today’s article is going to be about on of the many colorful, child friendly, and well edited shows on television. Just kidding, of course I’m going to be talking about Sunday’s The Walking Dead premiere. You saw the title, you know what’s up. 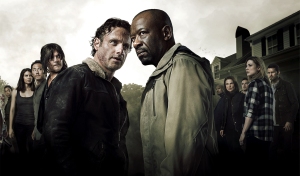 I have a friend, let’s call him Bryan. He stopped watching The Walking Dead somewhere between seasons 2 and 3 like so many other individuals. I desperately wanted this to be the episode that could get him back on the bandwagon and that would inspire him to marathon everything that he has missed. This was not that episode. It was good, for the most part. Definitely a sold start to season 6, but it seemed like it was trying to piss me off the entire time. If you saw the episode you know what I am talking about.

For those of you who did not see it, I’ll try to make my point without giving away too many spoilers. Before watching the episode, I imagined the writers doing one of two things; either jumping ahead some amount of time into the future, or picking up the series right where season 5 climatically ended. Instead they decided to do both, somewhat poorly. Don’t get me wrong, a lot of loose ends are tied up, a lot of new dynamics are explained, and everything makes sense from both a narrative and objective standpoint. The issues I have is that the show decided to have all of their flashbacks in black and white and that the flashbacks are cut randomly in between a pretty awesome action sequence.

I really do not know why they decided to make all the flashbacks black and white. All the flashbacks in previous episodes have been in color and I really do not think doing it this way contributed anything to the episode. I actually really want to know why they made this aesthetic decision. Were they going for a George Romero vibe? Did someone just figure out how to work the filters on their phone? Or did the writers think that the audience would not be able to distinguish between the main story and the flashback without there being some sort of obvious tell? If the last one is the reason, then I’m actually a little insulted.

Also, having the flashbacks spliced in between the action was upsetting to me. To paraphrase a quote I’m sure Bryan would appreciate, I think stories should begin where they do naturally, not where they get exciting and then cut back to exposition. Other creators, like Quentin Tarantino, can get away with this because they add a level of suspense and mystery to their works through this model. In last night’s TWD episode, it was just distracting.

None of these reasons should be enough to discourage you from watching the episode, however. It was as good as any other Walking Dead episode, and a solid start to the season. There was plenty of action, some great character interactions and growth, and a cliff hanger that has had my roommate and myself buzzing for days. It is a good episode for fans of the show, just not good enough for me to start hounding Bryan to watch it again.

What did you guys think of the season 6 premiere? Let me know in the comments down below and, if you feel obligated, give this post a like while you’re down there. I really appreciate it. As always, you can subscribe to 4B via email in the upper right tab. Also, if you want to stay up to date, you can like the official BaddaBing BaddaBlog Facebook Page, or follow me, @LucasDeRuyter, on Twitter. Have a great rest of the week and be sure to come back on Friday for News for the Mighty, News of the Week.