Happy Humpday BaddaBing BaddaBlog readers! For those of you who don’t know, today is more than just another Wednesday. One this day, BaddaBing BaddaBlog is officially 1 week old! I would like to thank everyone who helped me get here and inspired me to keep writing. We did it everybody!!! If you’re new to the Blog and have no idea what’s going on, don’t worry about it. Just know that the blog is growing older and that you should keep coming back if you want to watch it grow from infancy to adolescents to it’s awkward teenage phase and finally adulthood. If we’re going by internet time this should take around 5 to 6 months, so stay tuned for that.

Today’s Pop-Culture Wednesday! Sorry I don’t have a punny title for this segment…………yet. In this segment I’m going to be taking about recent events that have occurred in the word of media. Since this is a particularly vast industry, I’m going to be focusing on news and properties that I find particularly interesting or that I feel are extremely relevant or mentionable. Today, I’m going to be writing about the upcoming television series, “Fear The Walking Dead”, the abysmal new Fantastic Four (for some reason advertised as Fant4stic), and Adult Swim’s newest breakout hit “Rick and Morty”.

So it shouldn’t surprise anyone that the people over at AMC, the television network that produces and broadcasts The Walking Dead would want to cash in on this franchise even more. So they decided to create a spin-off. Fear The Walking Dead is going to feature an entirely new cast of characters and will take place just as the zombie outbreak is starting. Which could potentially be a great idea. I would love to see a Steven King-esq drama set in The Walking Dead universe. It could potentially be extremely entertaining to see the blood and violence dialed back, in favor of examining who characters and societies change as the world drastically changes around them.

However, I’m going to go into this skeptically and with low expectations. AMC is pretty notorious for mishandling their programs and mistreating their creative personal. For example, they fired the director of the first season of TWD, who played a large roll in making the show popular, which caused the second season to be, with the exception of a few break-out moments, easily the worst season of the show thus far. Also spin-offs in the television industry are pretty notorious for sucking. *cough* Joey, *cough* Dragon Ball (Giant Turd) GT, *cough* AfterMASH. I very much want this show to do well, but at this point I know better than to go in with high expectations. For those interested, FTWD will premiere this Sunday at 9/8 central.

This is bar none the worst movie of the summer. It currently has a rating of 8% on Rotten Tomatoes and is projected to loose millions of dollars for the studio that produced it, Fox. I have not seen the movie, but that’s because I prefer not to willing subject myself to things that make me feel sad and angry. This movie is so bad that people have been forced to ask the question, “why was this even made?”. Well, the answer is Fox basically had to or else they would no longer own the rights to make Fantastic Four movies.

You see, waaaaaaay back in the 90s, the comic publisher Marvel wasn’t doing so well. Actually the comic industry as a whole was not doing well, but that’s a whole post in and of itself and I may write about that another time if enough interest is expressed by you guys reading this. Anyways, long story short, due to being called out for some long standing business practices, comics not selling as well as what they had been, and competitors like DC comics and the newly founded Image comics doing well, Marvel had to sell some of its properties to avoid bankruptcy. They  went bankrupt anyway (yeah, the guys who are singlehandedly changing the film industry right now nearly went out of business, weird), and the X-men and Fantastic Four IPs wound up being owned by Fox. However, a clause in the contract of these purchases stated that Fox has to make a movie with these characters every few years, otherwise ownership reverts back to Marvel. So basically Fox has to make a Fantast Four movie every few years otherwise they don’t get to make any Fantastic Four movies, ever.

That’s how a movie that is as bad and expensive as this one came to be, despite Hollywood and the film industry going to great lengths to create a climate where this type of movie should not exist. It has also caused a petty and hateful relationship to form between Fox studios and Marvel. If you get a somewhat dark kick out of very public downward spirals and adult businessmen acting lick children, congratulations, because this is going to be the gift that keeps on giving. Fox and Marvel are showing no signs of kissing and making up and I would bet money that we hear about a very low budget Fant4stic sequel. 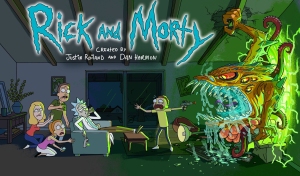 Rick and Morty is, in my humble yet completely accurate opinion, the best show on television right now. It may even be the greatest show to come out in the past decade. The show was created by the fantastic (actually fantastic and in no way fant4stic) duo of Justin Roiland and Dan Harmon. The show revolves around eccentric, alcoholic genius Rick Sanchez and his good-hearted, but distressed and naive grandson, Morty Smith. Each episode usually feature Rick and Morty going off on some high-concept science fiction misadventure, and as the show progress the rest of Morty’s family is slowly integrated into these debacles.

The show is amazing because it is the perfect combination of comedy, science-fiction, dark humor, satire, and, most importantly, it is firmly grounded in reality. While the show tackles the most outrageous sci-fi concepts, it goes to great lengths to make sure these stories unfold as they would if they happened in real life. There are no consequence free happy endings in this show, all victories are pyrrhic. No character is completely good or evil and each person’s actions are mostly derived from a need to pad their ego. Even when a character goes out of their way to do something nice fore someone else, there are almost always unintended consequences.

The best thing about Rick and Morty is that it follows their ideas and storylines out to their most likely conclusion. The show is not afraid to be dark and weird. For example, in one episode Rick, Morty, and Morty’s sister, Summer stumble onto a planet that has each of it’s inhabitants being controlled by a hive mind entity (that Rick just happened to have dated at one point). Summer finds it despicable that so many people have been robbed of their free will and tries to free them, while Rick is lapsing into a relationship with her old flame, and Morty is just jaded and knowledgeable enough at this point to know how a situation like is this likely to play out. Summer is somewhat, and some of the aliens regain there autonomy…..and the first thing they do is start a race war. While this is awful and hilarious at the same time, it demonstrates the show’s commitment to being realistic, if a bunch of people are allowed to act however they please, of course they are inevitably going to do something shitty.

If I have not convinced you to watch this show yet, here’s a clip and one of my favorite quotes from the show.

Morty: Can I show you something?

Summer: Morty, no offence, but a drawing of me you made when you were eight isn’t gonna make me feel like less of an accident!

Morty: [points outside] THAT, out there? That’s my grave.

Morty: On one of our adventures, Rick and I basically destroyed the whole world, so we bailed on that reality and we came to this one. Because in this one, the world wasn’t destroyed. And in this one, we were dead. So we came here, a-an-an-and we buried ourselves and we took their place. And every morning, Summer, I eat breakfast 20 yards away from my own rotting corpse!

Summer: So… you’re not my brother?

Morty: I’m better than your brother. I’m a version of your brother you can trust when he says, “Don’t run.” Nobody exists on purpose. Nobody belongs anywhere. Everybody’s gonna die. …Come watch TV?

Season two of the show is currently airing on Cartoon Network on Sundays at 11:30/10:30c. Episodes have also been posted to watch for free on Youtube and on Adult Swim’s website.

Alright guys, that’s some of what’s going on in Pop Culture and my opinions about them. If you enjoyed this post, like it and leave a comment down below. If you want to get up to notifications whenever I post something new, subscribe via email in the dropdown area on the upper right side. You could also follow and like BaddaBing BaddaBlog’s Facebook, conveniently linked to right here. Also, follow me on Twitter, I’m @LucasDeRuyter, I promise I only use it to make jokes and promote this blog. Thanks for reading and good luck getting through the rest of the week.